A new water treatment plant and distribution network comes into operation in the Loch Ness region. Since the project began in 2018, it has stretched the problem-solving abilities of its engineers, innovated UK-firsts, crossed international teams, and garnered several industry awards for the solutions forged during its construction.

The project was led by ESD Joint Venture, which brings together MWH Treatment, Galliford Try and Binnies, on behalf of client Scottish Water. The objective was to secure the long-term supply of clear, fresh and great-tasting drinking water to the bustling communities of Fort Augustus and Glenmoriston, with capacity to meet significant peaks in demand during the tourist season.

The four-year project, one of the biggest drinking water investments made by Scottish Water in recent years, involved some unique engineering challenges. In constructing a new treatment works, ESD also had to create a new intake system from Loch Ness and then create a distribution system to connect two previously separate water supply areas. This includes creation of two service reservoirs – one on high ground north of Fort Augustus; and one which re-uses part of Invermoriston’s previous Water Treatment Works to provide improved resilience to the area. 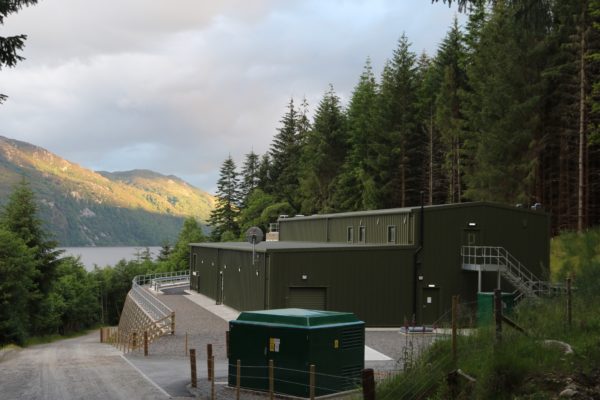 A core challenge was that the route of the connecting pipework had to follow a 10km section of the famous Great Glen Way. This was the only viable option on the steep slopes above Loch Ness, avoiding major disruption either to the A82 trunk road or to woodland habitat.

Within Fort Augustus, a new water main crossing also had to be achieved beneath the River Oich and the 200-year-old Caledonian Canal, one of the Highlands most popular visitor attractions and a Scheduled Ancient Monument. This work had to navigate unique topography and ground conditions, both natural and man-made, while safeguarding both the structure of the Canal and the local environment.

Two major complications arose during the underwater phases of work. The new intake system required the installation of a 75m pipeline on the floor of Loch Ness, Scotland’s (and the UK’s) largest freshwater loch, within the dramatic landscape and distinctive ecology created by the Great Glen Fault.

To avoid using concrete, a novel approach for anchoring the pipe in place was developed instead, using mesh bags filled with rocks as the main structure to secure the water intake. Disruption to the loch was further minimised by assembling the pipes on land and then floating them into place using a ballast and concrete collars for positioning.

Another task was to use horizontal directional drilling and pipe borings for the 350 metres of distribution pipes that would run under the River Oich and the Caledonian Canal. Soon after drilling began, engineers noticed a loss of drilling fluid (which maintains the drill’s stability and transports cuttings to the surface), indicating that the drill had encountered voids in the rubble used by the Canal’s 19th century builders. 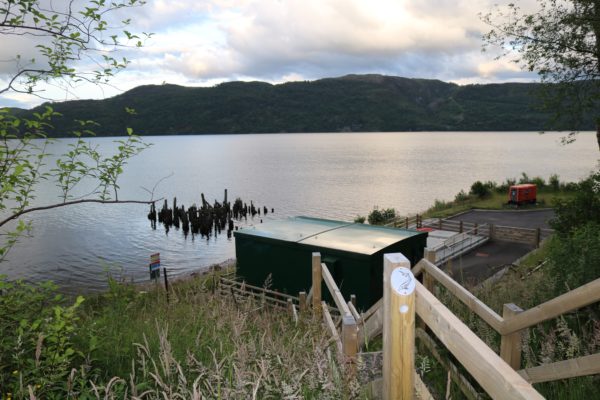 An alternative solution for the Canal was developed utilising a pioneering hammer-driven auger bore technology sourced by Nicol of Skene from Finnish company Geonex. The solution offered enhanced ability to deal with variations in ground conditions, suitability for crossing beneath water courses with only minimal separation, and speed of set up. This was the first time this approach had been used on a Scottish engineering project and the crossing length exceeded the normal limit for the technology.

Working to restricted windows around the tourist season and salmon migration cycle, the team had to find significant operational efficiencies as the project progressed. One approach was to shift assembly of the treatment plant offsite to sub-contractor RSE’s factory in Muir of Ord, where the 12 modules for the building were designed, fabricated, assembled, tested and pre-commissioned. Only 15% of the total project hours were spent onsite, which greatly improved the cost, health and safety and carbon performance of the project.

The new water treatment works, which has just gone into supply, use nano-filtration membrane technology – a process ideally suited to the removal of organic matter that uses fewer chemicals, and generally has a lower carbon footprint. It also uses chloramination rather than chlorination. This process is increasingly common in Scotland and provides greater residual disinfection in the distribution system in addition to improving the taste of the water.

Wendy Cooper, Chief Operating Officer, ESD, commented: “The Loch Ness project has encountered many challenges along the way, but the team has managed to achieve excellence in delivery – and in a way that is sustainable and sensitive to the outstanding natural landscape and the local communities. This is all down to the combined efforts of the Scottish Water team, ESD, key supplier RSE, and local supply chain companies, including many from the Highland region.”

Mark Dickson, Director of Capital Investment, Scottish Water, added: “A mix of new technologies, digital approaches and ingenuity have driven this project and enabled it to overcome some significant challenges. By working closely with the Highland Council, local businesses and communities, we hope that we have left a positive legacy, both in terms of what has been built and the way it has been achieved. Most importantly, we have enabled customers to be supplied with clear, fresh and great-tasting drinking water on a sustainable basis for decades to come.”

We use cookies on our website to give you the most relevant experience by remembering your preferences and repeat visits. By clicking “Accept All”, you consent to the use of ALL the cookies. However, you may visit "Cookie Settings" to provide a controlled consent.
Cookie SettingsAccept All
Manage consent

This website uses cookies to improve your experience while you navigate through the website. Out of these, the cookies that are categorized as necessary are stored on your browser as they are essential for the working of basic functionalities of the website. We also use third-party cookies that help us analyze and understand how you use this website. These cookies will be stored in your browser only with your consent. You also have the option to opt-out of these cookies. But opting out of some of these cookies may affect your browsing experience. For full details, see our terms and conditions.
Necessary Always Enabled
Necessary cookies are absolutely essential for the website to function properly. These cookies ensure basic functionalities and security features of the website, anonymously.
Functional
Functional cookies help to perform certain functionalities like sharing the content of the website on social media platforms, collect feedbacks, and other third-party features.
Performance
Performance cookies are used to understand and analyze the key performance indexes of the website which helps in delivering a better user experience for the visitors.
Analytics
Analytical cookies are used to understand how visitors interact with the website. These cookies help provide information on metrics the number of visitors, bounce rate, traffic source, etc.
Advertisement
Advertisement cookies are used to provide visitors with relevant ads and marketing campaigns. These cookies track visitors across websites and collect information to provide customized ads.
Others
Other uncategorized cookies are those that are being analyzed and have not been classified into a category as yet.
SAVE & ACCEPT
Powered by